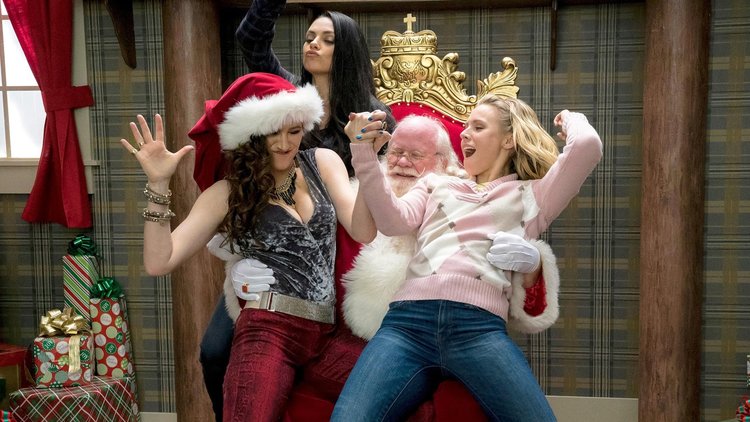 Having accidentally stumbled upon Bad Moms on Amazon Prime, I was pleasantly surprised by its humorous and unconventional take on parenthood, which was relatively amusing and a fun watch for a Saturday afternoon. How this film got a sequel? I’m not quite sure, but in the run up to Christmas, and after a few drinks with dinner, I cautiously booked my ticket, hoping for a similar experience to the first and that’s pretty much what I got, but perhaps too similar?

The film starts with Mila Kunis’s character, Amy, sat on the stairs of her suburban home, explaining through voice over, that she’s ruined Christmas for her two children on their first Christmas since divorcing their dad. Flash back then takes us to several days before Christmas where we’re, in very quick succession, re-introduced to the other main characters and each of their Moms arriving unexpectedly for the festivities. Promptly, the daughters declare that they are ‘taking back Christmas’ from their moms, particularly Amy’s mom (played by Christine Baranski) whose disapproving thoughts of Amy’s mellow Christmas plans with the kids, are the primary focus of the film.

An enjoyable watch for most part, I can’t say it got me in the Christmas mood nor did it convince me that a sequel was warranted but I enjoyed seeing these three ladies working out their relationship problems just in time for Christmas and I found myself laughing along with the gags and generally enjoying the plot.

However, the first act of this film is very similar to the original, with the writers clearly harking back to the previously successful gags of moms getting drunk in public and lots of slow mo laughing and jumping up and down – at one point they even take all the kids to a trampoline park and there’s a good 10 minutes of middle aged women jumping in slow mo. A little uncomfortable and doesn’t move the plot forward, at all.

Perhaps not one for the big screen, but if you’ve got a spare 90 minutes of an afternoon, it’s a decent watch. It will never be a Christmas classic, in fact the season could have been interchanged for any holiday and the story could basically stay the same. It’s an enjoyable way to pass the evening if you want to leave your worries, and your brain at home.